Game Over: Fighting Back Against Hong Kong’s Video Game Addiction

High dropout rates, impaired social skills and isolation—recognising the toll of gaming addiction on teens is critical in getting them the help they need to thrive. Academic and social pressures are leading more and more Hong Kong kids to retreat into the virtual world of gaming.

According to a new report in the South China Morning Post, young gamers are “putting their mental health at risk” in their quest for entertainment and escape through video games.

Earlier this year, the World Health Organisation (WHO) officially recognised gaming addiction as a mental health disorder. The WHO characterised it as demonstrating impaired control when it comes to gaming, and giving increasing priority to gaming over other activities. Those suffering from this disorder are also known to continue gaming—or even increase the time they dedicate to it—“despite the occurrence of negative consequences.”

Hong Kong is uniquely affected by this technological phenomenon. The ability to identify the warning signs of gaming addiction is becoming increasingly important for parents and gamers alike. Treatment clinics like The Cabin Hong Kong are providing effective addiction services to those who are struggling to get their gaming addiction under control.

Cheung is particularly concerned about the susceptibility of primary school students to gaming addiction in the city. A 2017 study of children aged nine to 11 in Hong Kong suggested that 10 per cent were dedicating more than 20 hours a week to gaming.

Also contributing to the public health scare of gaming addiction is the growing e-sports sector in Hong Kong. E-sports are multi-player video games which are played for an audience and tend to attract young gamers. Hong Kong is not blind to the profits to be made in this billion-dollar industry, and a technology start-up, Cyberport, is working towards establishing Hong Kong as a regional gaming hub in the e-sports industry. With access to a budget of HK$100 million, Cyberport aims to host both local and international live tournaments supported by corporations.

A spokesperson from Hong Kong’s department of health told the South China Morning Post that it could expect the number of gaming disorder cases to increase as long as gaming was “promoted under the umbrella of e-sports.” 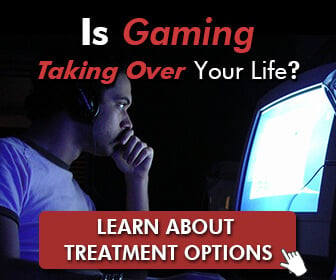 When It’s More Than Just a Game

With video game exposure starting young and with the potential financial rewards of professional gaming, the temptation for teens to immerse themselves in virtual activities is high.

Here are five common signs that parents can look for to determine whether a teen’s gaming hobby is nearing addiction:

Concealing the amount of time that they play

If you catch your child lying to you about how often they are gaming, it can indicate that they know they are engaging in it too much. Gaming addicts often lose track of time they spend playing. When confronted, it’s not uncommon for kids to get defensive about their gaming, or take their game time to a friend’s house to avoid being caught at home.

Irritability and restlessness when denied the chance to play

General impatience and annoyance when away from the computer or phone are indicators of a gaming compulsion. Addictions cause cravings to engage in certain behaviours, and if you see this in your child, it is a sign that you might need to intervene to help them change their relationship with technology.

Academic pressure to succeed is intense in Hong Kong. If you notice your child forgoing homework to play games, get reports of him or her nodding off in class, or losing interest in subjects they once excelled at, excessive gaming could be at the source of the problem.

Thomas Chan, 18, is a recovering video game addict. He told the South China Morning Post that he enjoyed gaming because he could make friends without “the awkwardness of face-to-face communications.” He added, “the computer is always there for me.” It is important for parents to encourage real-life social interaction and to provide outreach for kids who are choosing virtual friendships over actual ones.

As many players often engage late into the night, teens can be more tired than normal and lose focus as a result of not getting enough sleep. Too much screen time can also lead to eye problems, and it’s not uncommon for gamers to sacrifice personal hygiene in their preoccupation to their virtual activities.

Bringing Gamers Back into the Real World

According to Dr. Cheung, a danger of gaming addiction is that it can affect young people’s ability to be satisfied with reality.

“My concern is that those who are addicted can never accept the fact that real life can sometimes be boring and frustrating,” he told South China Morning Post.

While the first response to overindulgence in gaming is an attempt at self-regulation, sometimes outside assistance from mental health professionals is necessary. After all, abstinence doesn’t always work: the mother of teen gaming addict Thomas Chan went as far as taking the Wi-Fi router with her to work so that her son could not play games, but he instead turned to gaming centres while she was out. It wasn’t until he had dropped out of school and later received counselling that he was able to get his gaming under control.

Early intervention, before a teen has experienced severe academic and social effects, is the best way to treat—and halt—the negative consequences brought on by excessive gaming. This typically involves practice identifying triggers, including stress or social anxiety, and the development of healthy coping mechanisms so that your child doesn’t retreat into gaming to deal with life’s problems.

Decisive Action and Patience for the Win

Thomas Chan’s mother advises other parents to “have a lot of patience” in helping their children get “back on the right path.” The internationally licensed staff at The Cabin Hong Kong do not want you to have to do this alone. Our flexible, evidence-based outpatient treatment programme—consisting of both private and group counselling—means that your child’s rehabilitation does not have to come at the expense of his or her school and social life.

For those who would benefit most from rehabilitation in a setting removed from everyday triggers, The Edge offers a residential programme for young men to overcome their gaming addictions. The innovative treatment programme available at The Edge is just a three-hour direct flight from Hong Kong, in the mountains of northern Thailand.

Contact us today to learn more about how to hit the reset button on excessive gaming.

Smartphone Addiction: Selena Gomez Went 90 Days Without Her Phone. Should You?