A recent study at a Swiss university revealed a troubling truth about its students: one in seven is taking ‘smart drugs’ to improve their academic performance. We know these nootropics are becoming ubiquitous among college kids, but what are the risks involved? 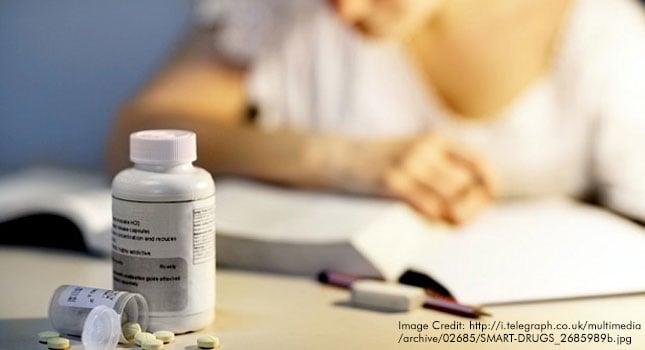 What Exactly is a Smart Drug?

Researchers are taking a closer look at the nootropic, or smart drug, phenomenon happening in many post-secondary schools across the globe. The name ‘smart drugs’ is fairly self-explanatory, but can a pill really make you smarter?

The short answer is: no.  The main function of most smart drugs is to diminish fatigue and boost alertness. Some also claim to enhance memory and cognition.  While these effects are temporary, smart drugs can result in long-lasting negative effects such as interference with dopamine system function and – as researchers are beginning to discover – addiction.

The Most Popular Nootropics

There are several categories of smart drugs.

Analeptics – These are what come to mind when you think of smart drugs.  Analeptics such as Mondafinil or Provigil are used to treat narcolepsy by stimulating the central nervous system.

Racetams are designed to treat Alzheimer’s or pre-dementia. They speed up the exchange of chemicals between brain cells, temporarily increasing cognitive function.  People who take racetams regularly often combine them with a cholinergic, which is also thought to also enhance memory and attention.  Common racetams are Piracetam, Aniracetam and Oxiracetam.

Stimulants including amphetamine medications such as Adderall and Ritalin are typically prescribed to treat ADHD.  These are popular among students as they increase focus and alertness, allowing them to stay awake for long periods of time.

Smart drugs are becoming as popular as energy drinks as a means to enhance performance and ability to meet the rigorous demands of college.  These drugs are also making their way into the office in high-stress work environments.

Why Smart Drugs are Bad for the Brain

So what could be wrong with taking a pill to increase attention and cognitive function?

While they may temporarily increase users’ feelings of alertness and focus, smart drugs can have damaging long-term side effects.  Smart drugs produce their sought-after effects by overstimulating the central nervous system, damaging or killing cells.  This results in diminished abilities in areas of organization, multitasking and planning – not so smart.

Nootropics block the dopamine transporters which results in more dopamine staying in the brain. Dopamine is the brain’s ‘feel good’ chemical – many addictive drugs affect dopamine in the same way. In fact, both cocaine and methamphetamine have the same effect on the brain, albeit to a greater extent.

While many believe that there is a relatively low rate of abuse or addiction to this stimulant that could very well be changing. Studies are still trying to determine the facts about how many people are taking smart drugs.  There have not yet been any long term studies on the effect of smart drugs on healthy individuals who do not have a specific condition for which a doctor prescribes them.

Are these ‘Cognitive Enhancers’ Addictive?

New research is showing that nootropics are more addictive than first thought.

While smart drugs are not known to cause severe physical dependence, it is important to consider the difference between dependence and addiction.

Being addicted to a substance has to do with using a substance despite the adverse consequences of both seeking out and consuming it. It manifests as cravings, compulsive drug use and an ability to stop despite negative consequences. Addiction is classified as a disease.

Dependence, on the other hand, has to do with the body’s physical reaction to the substance. When a drug is consumed regularly, the body adapts to this and develops a dependence on the drug, which can result in withdrawal symptoms when it is no longer consumed.

A person can be dependent, or addicted or both. In the case of smart drugs, college students who are taking the drug to help through stressful times may not realise that even this amount of use can lead to an addiction.

As smart drugs become more commonplace in both school and work settings, more people are bound to have issues with dependence and addiction.

The good news is that there is help for those who have developed a compulsion for cognitive enhancers. At The Cabin Hong Kong we house clinical professionals who are trained to handle a myriad of substance addictions. Our proven techniques help addicted people relinquish their physical dependence and get to the root causes of their addiction.

If you or someone you know is struggling with addiction, contact us today.

A call for effective treatment options in southeast asia