There is more to a hidden heroin addiction than track marks and used syringes – learn the physical and behavioural symptoms of heroin addiction, and what to look out for if you think your loved one might be struggling with one.

Heroin is a potent opiate that leads many of its users to addiction and dependence.  It is an extremely addictive drug that quickly grips its users, and even a few uses can mark the beginning of a downward spiral. Continuous heroin use creates tolerance, which means that the user has to take more of the drug in order to achieve the same effects. Over time, higher doses are required and recreational use turns into dependence and addiction.

Secrecy is a main component of addiction – many drug users are not honest about their substance abuse, particularly when it comes to heroin because of the extreme taboo surrounding it. If you are worried about your loved one abusing drugs then you might have to keep an eye on them to assess their behaviour. The following tips will help you determine if someone you know may be using, and how to get them into heroin addiction treatment.

There are several physical indicators of heroin addiction to look for if you are concerned about your loved one:

Altered behaviour is another common indicator, since users often come across as depressed and withdrawn. People who used to be social and outgoing can become introverted due to drug use. They may experience erratic mood swings. Users enjoy the company of other users, so they will typically find new friends who support their addiction, along with suppliers and other individuals who promote drug use.

Heroin-addicted people often come across as restless or anxious, and can even become aggressive toward those who question them about their changed behaviour or addiction. Since users start to alienate themselves and move away from their usual support group, their emotional health is often sacrificed. This deteriorates even more as the addict continues to find ways to stay numb, which leads to phases of depression.

Unexplained Drowsiness and Nodding Off

Even though heroin use causes an initial sense of euphoria, it only lasts for several minutes and is followed by many hours of drowsiness. While drowsiness alone does not indicate heroin use, sudden dips in energy levels and frequent episodes of drowsiness or irregular sleeping patterns can be an indicator. Physical drowsiness also comes with mental lethargy, such as slow speech and confusion. Displaying this type of behaviour is most common soon after usage and is commonly known as ‘nodding off’.

Keep your ears open for heroin-related slang as well. Heroin users tend to talk about the drug by using its street names, such as smack, dope, skag and junk. ‘Chasing the dragon’ means to smoke heroin, ‘skin-popping’ means injecting heroin under the skin and ‘speed-balling’ is a mixed injection of cocaine and heroin. A paraphernalia kit can be called a ‘rig’, ‘outfit’ or ‘the works’.

Using syringes for injection is one of the most popular methods of heroin use. Possessing hypodermic needles, without any medical requirement for them, may signal heroin use. Hypodermic needles are often found with spoons, some type of filers (such a cigarette filter or cotton bud) and a candle or lighter, which is used to heat up and dissolve the drug. Cords, belts or rope may be used to restrict blood flow so that veins can be more easily found.

The kit that is used for heroin may be kept in a case and is often hidden in the bathroom or bedroom. Heroin can also be smoked by using aluminium foil. Empty plastic pen cases or bills can be used to make straws. Metal or glass pipes are also used, and are similar to meth smoking devices. Also look out for self-made devices created from items around the home that can be used to consume heroin.

Many users keep or hide heroin in tied, deflated balloons or small plastic bags. Bags are often colourful or have a logo in an attempt to conceal what is inside. 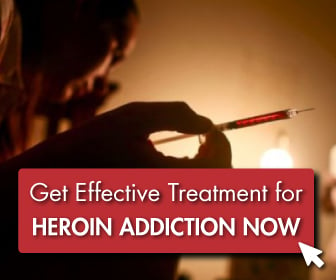 Other Indicators of Heroin Addiction to Watch For

Drug addiction can make people behave in ways they never normally would.  As the situation becomes more desperate, people may do whatever they can to get their hands on the drug.  Keep an eye out for missing money and valuable items. Heroin users may experience financial difficulty once they become addicted, which can cause them to borrow money from whoever they can. Addicts also become very secretive and end up lying in order to hide their habit, or acquire more of the drug.

Be wary if you constantly hear excuses about your loved one’s altered sleeping pattern, their money issues and their whereabouts.  Many addicts end up hanging out with other users and lying about who they are seeing. They may also find it hard to maintain their former relationships because of their constant lying and manipulation to those closest to them.

If you suspect that your loved one is abusing heroin, you are already doing the right thing by finding out more about heroin and addiction.  Understand that heroin addiction is a huge battle, and your loved one can benefit from having a knowledgeable person beside them. You can educate them about the short- and long-term risks of heroin, and educate yourself on support options.

Getting Treatment for Heroin Addiction

Ultimately, your loved one should come to terms with their addiction in order to seek treatment on their own. This is not easy to do because of the denial that is often an intrinsic part of addiction. Especially in the case of heroin, which is tremendously physically addictive and entails extremely uncomfortable withdrawals, it is necessary to seek professional help. You may need to stage an intervention for a drug user in order for them to agree to seek help. Though it may seem like an overwhelming challenge, entering rehab is a great start for addicts to turn their lives around.

Proper drug rehab involves medical professionals who assist in a more comfortable and safe withdrawal, followed by therapeutic support to help them live a drug-free life.  Contact The Cabin Hong Kong today to find out how we can help see you and your loved one through to a successful recovery.

The Disease of Addiction: Is it Real?